Tropical Art’s “Macbeth” has very successfully launched with speeches from all the key participating partners including ARCs Disability, Deadly Hands/Deaf Services, the RADF Designers, and the Cairns Regional Council, followed by all the infamous and reknown Scottisch murder and mayhem.

It opened on Friday 23 October 2015 and is playing through to a final night on Halloween, 31 October!  Have a look at the poster and come along! 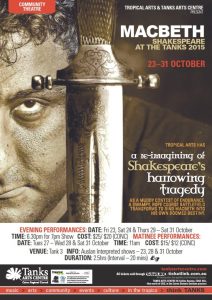 This years Shakespeare at the Tanks launched with all battles, murder and mayhem for which Shakespeare’s infamous “Scottish Play”  is reknown launched on Friday 23 October with an all inclusive caste delivering a dramatic performance of the kind that only the Tropical Arts can deliver .. this time also  in Auslang

Come along to any of the performances at Cairn’s Tanks 3 (see the poster above), noting that the final performance will be on this years Halloween Saturday 31 October 2015

Celebrating its 59th year, the Annual FNQ One Act Play Festival is a proud tradition in our region that Tropical Arts has the pleasure of hosting in 2015. Join us at the Centre of Contemporary Arts from the 24th to 26th of July and celebrate the diverse talent this region has to offer.  For more information go to the COCA website.

Over the Christmas and New Year break, Tropical Arts’ members and many others interested, who enjoy our work, continued to ask THE question, “What’s next??”  Many suggestions were made, both in formal feedback sessions and social conversation.  The list was long, including one of the most popular requests – the famous Scottish Play – (I’m not sitting in a theatre now, so I may avoid various curses and type,) “Macbeth”.  “Othello” always got a mention with Warren Clements in the same breath, and “Twelfth Night”, “The Merry Wives of Windsor” amongst other comedies and histories – so the same dilemma arose – how do we make this call?  Do we need to do Shakespeare at all?  What about the wonderful “Star Wars by William Shakespeare”? or just a Dr Who version of anything would be fine…. such is our eclectic mix of madness at Tropical Arts… how do we make the decision?  And our community said, basically, collectively, “I just want to be in it!”

As nobody else was seen putting their cap in the ring to Direct the next production, it seemed that the final suggestion to the Tropical Arts Committee would fall to me.  So it was imperative that I think it through for myself too – and here’s what I came to:

For this reason, “Much Ado About Nothing” was high on my list.  And then, I had a discussion with our recyle nut designer, Ruby Boussard and she mentioned in passing a desire to make dragons.  Well, that was it – Benedick and Beatrice a definately dragons!  So there we have it folks, it’s been approved by the committee…

MUCH ADO ABOUT  DRAGONS!!!

See you in workshops and rehearsal, backstage or in the audience!

The 6th annual SHAKESPEARE AT THE TANKS: “It’s an epic journey for love” says Director, Avril Duck, “but it’s madcap and full of dubious motives and uncomfortable clinches.”

Featuring: Amelia Pegrum as Helena, Jesse Cook as Bertram, Warren Clements as the King of France, Sarah Urquhart as The Countess of Rousillon, Zelda Grimshaw as Parolles, Kevin West as Lord Lafeu, Velvet Eldred as the Widow of Florence, Heidi Davies and Mike Gleed as the split Clown and others include Douglas Robins, Dez Green, Alicia Jamieson, the Tropical Arts’ Children’s Ensemble and ARC Ensemble, Song Connection members and many more talented community actors. Keep tuned for the full cast list!

Please watch and share our youtube clip – many of the highlights of the show are there.  A Midsummer Night’s Dream – Shakespeare at the Tanks 2012.  Enjoy.

This year we have decided to tackle another, slightly “lesser known” comedy, with a title that has become a part of the lexicon.  “All’s Well that End’s Well” is about the folly of youth, the frustration of age and the triumph of commitment (or perhaps obsessive persistance/underserved love?).  Well, at least that’s how we begin…

I have attached the full script in a format you may be able to print out – otherwise go to http://shakespeare.mit.edu/allswell/full.html this link and download onto your Ipad or tablet to save trees.

Have a read.  See what you think..

At the close of 2012, Tropical Arts Association Inc has had an AGM, Christmas Party and we are now awaiting the DVD of our production of Shakespeare’s “A Midsummer Night’s Dream”.  The show was very well recieved by our audiences and it was the largest and most ambitious so far in terms of cast and partners.  There were up to 85 in the cast (varied from night to night!) aged from 4-74 with 12 paid professionals, 25+ school students, 22+ performers with a disability and a great range of talented community actors.  Backstage was just as diverse and exciting.

Tanks Arts Centre, Song Connection and ARC Disability services came along with us for the ride and we made sure there was a place for almost everyone who showed up, no matter how close to the production.  Please enjoy the photographs to see just how colourful and happening it was.

Shakespeare at the Tanks 2012 -A Midsummer Night’s Dream

Thank you for coming to see the show.  Expect to be enchanted….

To Join in supporting us… Click this link http://pozible.com/tropicalartscairns

Looking for an enjoyable fundraiser for your organisation?  Book a group of 10 or more for the 18th of October –  please click the picture of Titania and Oberon below for details: