Aaron Lee is a 26-year-old Cairns local, first-time playwright who has put his creativity out there after pouring his “heart and soul into this play”.

True Friends invites the audience into a quirky, fresh but recognisable world in which 2 young women become friends and flourish. The play explores the journey of their friendship and takes regular dives into the unremarkable, often invisible tech we use on a daily basis, without thinking. Characters sing when they want to, and the play builds to a frenetic climax with Aaron inserting a play within a play. Borrowing from Shakespeare’s Twelfth Night and transforming it into something with his unique spin, Aaron Lee takes the comedy to another level of nautical twinsanity.

The True Friends presentation will showcase scenes from the play, read and performed by a Tropical Arts ensemble cast who have come along to the exploration over 6 weeks. We are bursting to share scenes we love and get some audience feedback. A limited number of seats are available, so bookings are essential – please click “Going” on Tropical Arts Facebook page !

2021 marks the 11th year of the Tropical Arts/ARC partnership. Come along and find out how we are creating pathways into theatre.

Relive the experience of Tropical Arts Shakespeare at the Tanks’ 2014, “Much Ado About Nothing/ Dragon’s’.  Come to our final theatre workshops at ARC Hub, 52 McNamara St for your MAAD DVD and bring your own USB (8GB) .   Arrive in the morning from 11am to 12pm, before the Adult workshop or in the afternoon between 1.30 and 2pm before the Youth workshop.

Let me know you’re going to be there via email to the Secretary: LiciJ@bigpond.com

In 2014 Tropical Arts is producing its 7th Shakespeare play at the Tanks, ‘Much Ado About Nothing’ with a theme of ‘Dragons’. Tank 3 will be transformed into a Dragon Nest and Auction House, inhabited by a cast of Dragon Riders.

During the performance the dragon artworks will be for sale, pinned with a silent auction list.

Artists are invited to create dragons close to their hearts, and explore themes around the defence of environmental or personal issues. Your dragon can be of any breed, creed, colour, race, land, heritage, background, mixture, ideology, fashion, element, spirit.  Groups are invited to contribute a collaborative dragon or a collection of works themed around dragons.

Much Ado About Nothing Dragons

Tropical Arts reimagines Shakespeare’s biting romantic comedy, Much Ado About Nothing in a world with Dragons.

Prince Don Pedro and his officers are on furlough after a successful war campaign. They ride in, on Dragons. Their chosen retreat – Governor Leonato’s Dragon Auction House in Messina. The happiness of the host’s daughter, Hero, seems secure in her love match with Claudio, a young officer in Don Pedro’s company. But the bitterness of Prince’s bastard brother turns savage and shreds Hero’s dreams into tatters. The Dragon hearts of Benedick and Beatrice must break through their icy egos in order to feel their own love and restore order and joy into the Dragon World.

Yes you heard right! Tickets are on sale for the 2014 production of “Much Ado About Nothing/Dragons”. Join us for our 7th annual Shakespeare at the Tanks Arts Centre. Follow the link and visit us in our dragon auction house.

Much Ado About (Nothing) Dragons – Ticketlink

Tropical Arts presents the 7th annual Shakespeare at the Tanks. This year they reimagine Shakespeare’s biting romantic comedy, Much Ado About Nothing, in a world with Dragons

3 Amazing members of our Tropical Arts family flew down to Brisbane in March to receive the Queensland Disability Award for Arts and Education.  This honour was awarded by the Department of Communities, Child Safety and Disability Services because of our inclusive theatre model.

When the communications officer from the Department called me to organise who might be attending to collect the award, I was so surprised because I hadn’t realised that anyone had put in a nomination!  We are usually so busy trying to get the production up or apply for grants or coordinate lots and lots of people, that singing our own praises slips past too easily.  But bless the wonderful being of Douglas Robins for making sure that quietly, our Tropical Arts magic was in the running…. and you’ve got to be in it, to win it!

I was quite sad when I realised I was unable to take time off the Sentinel Chickens production I was  directing at JUTE.  However this gave way to a great thrill of asking some very special people to go down and represent us:

Warren Clements:  has been in all 6 of the Tropical Arts productions as a professional actor, mentor and tower of strength.

Velvet Eldred:  the 2012 Cairns Woman of the Year who first asked the question “Does inclusive mean that EVERYBODY can be included?” back in 2010 when she was the connector between ARC Disability Services and Tropical Arts

Matthew Rundle: the amazing first trailblazer – the first ARC trained performer to lead the way into our community theatre.  Now each year the ARC Ensemble represent 30% of our cast.

This award recognises the beautiful human spirit of creativity in community.

That’s every one of us shining on stage or helping to make it happen. 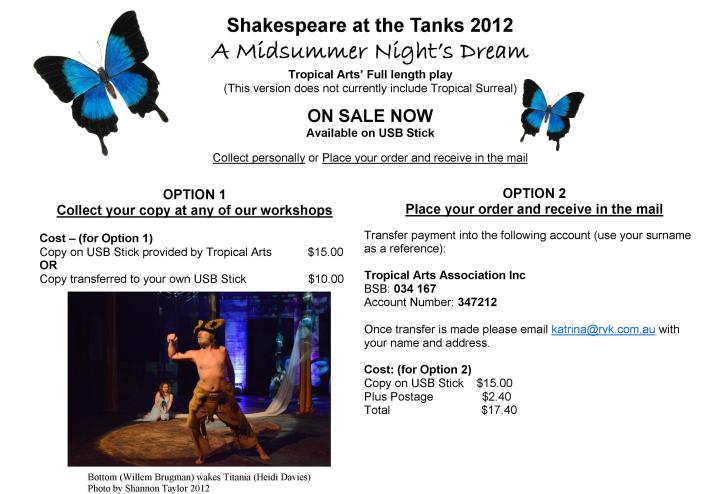 Hi all!  Grant writing frenzy at the moment – but I thought it wise to quickly divert my attention to this Tropical Arts blog site to let you know that we have solid dates now for our production….

Stay tuned for the details…

Also – see the post immediately below for our ensemble training… bookings coming thick and fast, please confirm your place.  Workshop participants are definately hot favourites for roles in ensembles!

Also – working on two pieces for the FNQATA One Act Play Festival at Malanda on the weekend 26-28 April – that’s soon!  Who’s keen to come and support us?  We are also still looking for a performer for one play.  First time Director, Douglas Robins has opened it up – any one of any gender or age (if underage, with parental permission) or persuasion may apply – inclusive approach!

Also, Theatre of Exchanges workshops, Lead by Willem Brugman (0434 594 674) are still on Thursday evenings and Saturday mornings – food for the performer with a wish to access deeper aspects.

There’s been workshopping in the Tanks:

Theres been roving around the Tanks: